Inaugural Concert 24. The Summer Jazz Festival Krakow, which will take place on 28 June 2019 in the Auditorium Maximum, will be a pre-premiere screening of a special project prepared by Nigel Kennedy for 2020. We will commemorate the 50th anniversary of the death of Jimi Hendrix- the greatest creator and innovator of rock and electric guitar . As a part of the project, Nigel will invite world stars to concerts. In the music and career of Kennedy, Hendrix plays a special role – the famous violinist has recorded albums dedicated to the legendary titan of guitar and is constantly drawing inspiration from his music.

The first of the great invited guests of Kennedy  will be one of the world’s leading jazz-rock guitarist Mike Stern. He played in groups of Miles Davis, Jaco Pastorius, in groups Blood, Sweat and Tears and Steps Ahead. He also always emphasizes that  his idol and inspiration is Jimi Hendrix.

Knowing the temperament and fantasy of Nigel and Mike, an artistic „Earthquake” awaits us! 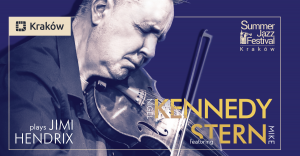